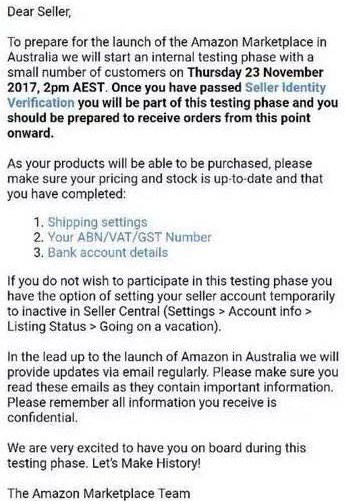 Amazon’s entry should help increase the amount of Aussie shoppers purchasing online substantially since Amazon brings a level of trust, price transparency, customer service and eventually logistical infrastructure that hasn’t really existed in Australia until now. There are already a lot of buyers in Australia that buy from overseas websites but I think that after the value proposition Amazon can bring to Australia is fully realized, it’ll bring a lot of that spending to the local platform as well as increase local awareness.

In terms of comparing the different Amazon marketplaces based on total sales volume, I think that Amazon Australia would be most comparable to Amazon Canada because both have large territory (which means higher fulfillment costs) and similar population sizes.

All orders will be seller fulfilled initially (that is, sellers will need to post out the goods themselves or using a 3PL) until Amazon gets its fulfillment centers ready.

Amazon has done a great job of generating PR with all the secrecy and only allowing merchants based on invitation to sell. While I’m excited to be selling on Amazon AU, I know that the Australian marketplace won’t hit its full stride until all of the sellers that want to sell on Amazon AU are selling which would enable a larger product selection for customers and the warehouses are fully operational meaning fast and cost effective fulfillment. That’s a big part of what makes Amazon attractive for online shoppers.

On the other hand, I do expect Amazon which is selling from a low base of zero in Australia to have explosive growth for some time to come.