We held our first mastermind meeting in Sitges (close to Barcelona) over the course of 3 days in a nice villa close to the beach. Since this was the first time I did anything like this, I thought I’d share my learnings and experiences while they’re still quite fresh. 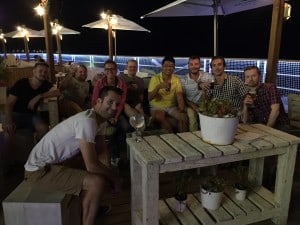 Background to the Mastermind

A friend (also an entrepreneur) and myself came up for the idea of a European Mastermind group back in January 2015 while we were attending another mastermind in Palm Springs, California over some cigar and beer. We both flew quite a long distance to attend the US meeting and thought that there should be something like this in Europe. We’re both based in Europe, there are a lot of entrepreneurs based in Europe and plenty of amazing locations within easy travel distance. To us, it seemed like a no brainer to have a mastermind group in Europe where we could have fun meeting other like-minded people a few times per year without having to travel 15+ hours. Thus, The Union was born.

To make sure that we attracted the right people, we had a few requirements:

We didn’t want newbies or people just starting out. Ultimately we had people with 5-7 figure per year businesses in the group.

2) You must be based in Europe

We figured since it is a “European” group but we ended up being fairly lax on this point. I think it’s preferable that you’re based in Europe so that we’re in the same time zone.

3) Your business must be primarily an info product, SaaS, or eCommerce

We wanted people that could communicate on the same level and understood the issues we’re facing without having to explain the basics. If you run primarily an offline business, you’re not going to know about squeeze pages or FB ads for example.

4) You have to pass the Skype Interview

When we came up with the idea, we came with the perspective of participants that enjoyed attending these things, having fun, without consideration to the fact that we’d have to organise the details, the agenda, and be responsible for the happiness and wellbeing of our attendees. For this mastermind meeting, it was 500 euros which covered exactly the cost of the large villa with swimming pool and the chef to cook us breakfast and lunch.

We’re still discussing the next mastermind group and we’re thinking of pricing at $5 to 10k per person.

Everyone arrived at Barcelona airport at different times — that part could have been organised a lot better.

We spent a lot of time with each other and it was really interesting to see how people formed relationships and the chemistry working. I think having the criteria made a huge difference to keep the quality of the people high and relevant for the group. A lot of people commented that they felt like they’d been long time friends from the first day.

We’ve spent some time with hot seats and the largest determinant of whether you get any value out of the hot seats is about the question that you ask. Typically most people don’t ask theÂ real question

We timed the event originally to be early June but made it later in June since a lot of the members are also part of the Dynamic Circle and they had a 350-person event in Barcelona. I had the opportunity to attend some of their meet ups which was fun.